Keith Kane was on the ticket box at the 50/50 dances on Saturday night at St Mary’s Hall. They were called 50/50 because half of the music was old time, and half new. The old time music was supplied by The Melody Makers Dance band which featured Lester Taylor (from Taylor brothers produce) on saxophone, a brilliant musician who learned from the Americans during the war, Gavin Franklin on piano (when Don Burrows, the jazz musician, came to town he was “blown away,” when he heard Gavin Franklin on the keys) and Frankie Langdon on drums (his family had the garage opposite Victory Park, just down from Public Inn).

The modern music was a rock band from Bendigo called The Emeralds. The MC for the dance was Des Dougald, a boxing champion, who went on to win a gold medal at the 1956 Melbourne Olympics. Desie Dougald was also a dapper dresser and a great vocalist. If a fight broke out, out back, where there was a bit of grogging on in cars, Des Dougald went and broke it up without having to take off his suit coat. Inside the hall, girls lined up on one side of the room waiting to be asked to dance while the boys congregated in the corner. The old time dances they did were Pride of Erin, Evening three step, Foxtrot. Since not all the blokes danced (they just stood in the corner and hoped they would meet a girl ), sometimes the girls had to dance with each other.

Vaughn Springs was a big drinking place. Those guys who went out there drinking, would arrive late and cause a bit of trouble but Desie Dougald would sort them out. There was a bit of kissing going on in the cars outside. 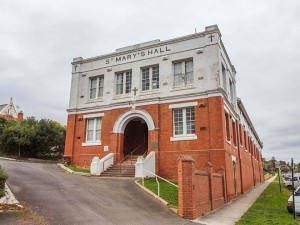