There was a barber called Mr Bogey who specialised in giving all the local kids bowl cuts in the 70’s. (One person says near Odgers Hardware in Hargraves St, another says he ran it from his house on Johnstone St – could be both!)

Captain John Hepburn unearthed a skull at the junction of Forest & Barkers creeks in 1838. 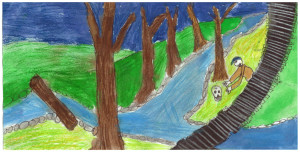 Stonemans supermarket was the first self serve supermarket in Victoria.
For further historical information on shop locations, see this Historic Town Walk brochure. 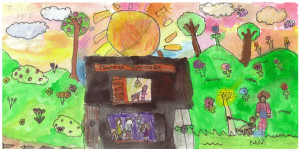 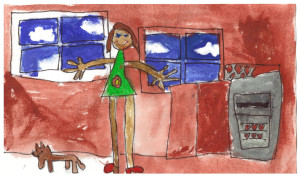 Dear tiny Miss Cowling and her little dog Sally. She lived up on Farnsworth St next door to Mr Kavanagh (retired headmaster of the high school).She used to make me heart shaped chocolate cakes when I was a little girl. She also made cupcakes and cordial for “those nice boys from the Gaol” (yes prisoners), when they walked the Grey Hounds in the evenings. Her father was one of the designers of the gaol, She remembered when (what is now my sister’s backyard) was a Chinese market garden.  (She lived somewhere on Farnsworth St)

Car going backwards up the footpath in Mostyn Street
She was in the middle of Mostyn Street East in her brand new automatic car, when she decided to drive…but she put the car into reverse, which put her into a pannick…which made her plant her foot hard on the accelerator!!  She went fast BACKWARDS…wildly turning the wheel, knocking out a verandah post and heading up the footpath towards Saffs Cafe…scattering tables and chairs and making people leap up running.  But before she made a big mess of their afternoon tea, she swung the wheel again; shooting back onto Mostyn Street and crashing into a car driving past.  Amazingly not one person was hurt.

Dog barking in Barker Street
A friend of mine left their dog tied up in Barker Street when they went in to have a coffee.  The dog greeted everyone passing by with a friendly hello “rruff rruff”…and many greeted the dog with a friendly hello “hello hello”. But later, as dog and friend were about to go, a grumpy shopkeeper from the next shop started saying “That dog barks and barks….you’d better not bring that dog next time”.  The dog looked a bit worried but my friend just said “This is a very smart dog….after all this is Barker Street!”.…and the grumpy shopkeeper did not know how to answer that! 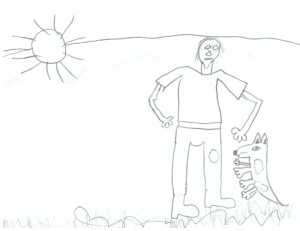 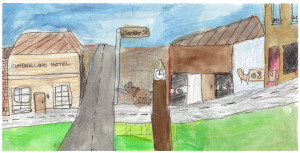 Shed with stuff from the gold days.
Someone I knew bought a place with an old shed.  Inside you could see it had been made of logs and mud, which they called ‘wattle and daub” in the early days.  The shed was full of old equipment for mining and measuring and melting gold into bars.  I was told they even found an old box with some gold still in it.

Dog with sore paw outside supermarket.
The front door of the old Stonemans Supermarket, which became the big IGA, was in Mostyn st next to the ANZ bank and there was a side door in the little street next to the Chemist.  One day a woman told her dog to wait at the front door while she went in to buy a few things…but she went out the side door and walked home.  The dog had a bandage on one front paw and every time someone passed by, she held it up so that the person would say “oh poor paw” and give the dog a pat.  The dog enjoyed all this special attention for three hours, before her owner remembered to come back and get her.