At Winter’s Flat School, there was an annual fundraising event. One year, you paid $5 or something like that, and were handed a cricket bat, and you could smash in the windscreen, or windows, or a panel of an old car – one person at a time. It only happened once!

Jean’s neighbour Frankie famously got the strap at the North school for having not done his homework and as a result never went back to school. He was witnessed by his brother who accompanied him for moral support, while he took “ten of the best cuts.” Afterwards he told the headmaster that he would never do that to him again as he was never coming back to school and, true to his word, he went north, lived off the land, ate wild barramundi, shot and sold wild pig and kangaroos, stored them in the Chiller. At their house they had had an ingot of gold wrapped in newspaper and used as a doorstop. Who would ever have known to steal it like that?

When she started school (current IGA) Jean was brought a second hand “superior” bike from Vin Whaley’s. Jean went to the school. At that time Jean remembers having to do exercises on hessian sacks at camp reserve and feeling humiliated at having to do these exercises in her skirt. Her favourite teacher, Miss Mosley, a large lady with white wavy hair, walked up and down between their desks knitting socks for the soldiers at war and teaching them Strauss Waltzes. They sang The Blue Danube and Shubert’s The Trout. 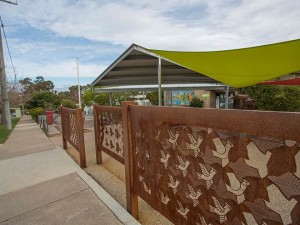